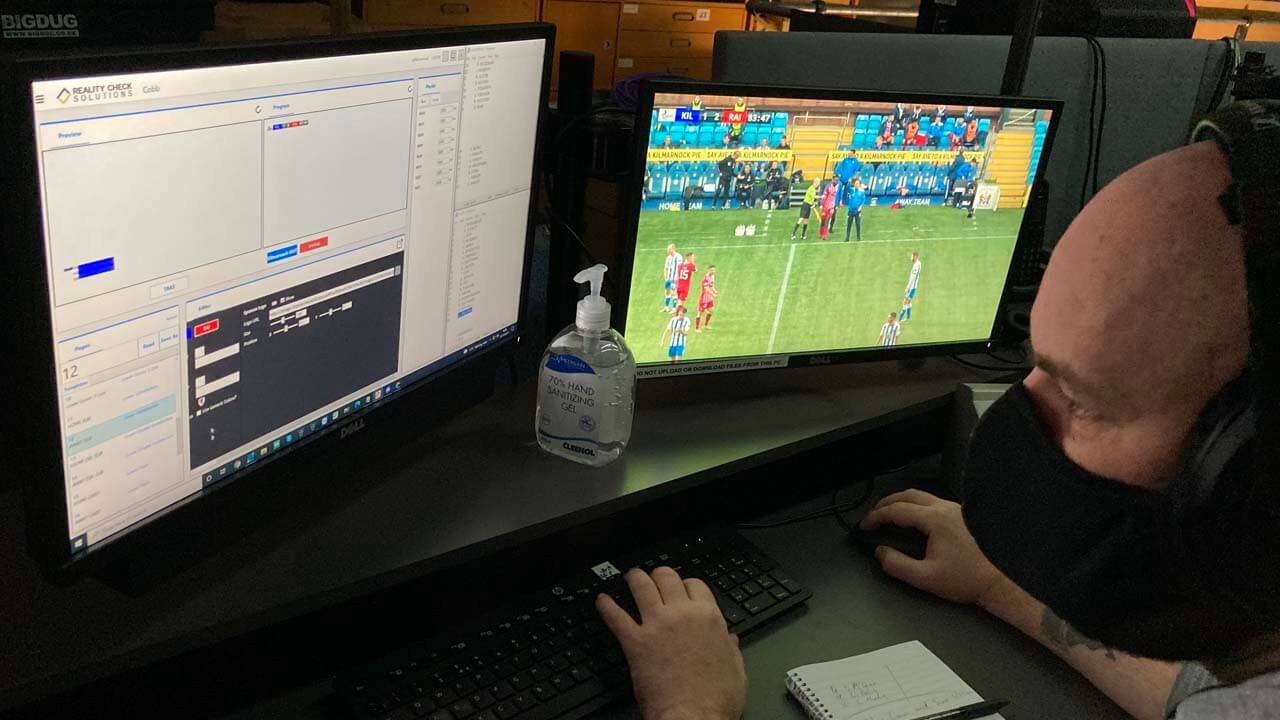 Leading independent Scottish production house QTV, the SPFL’s outside broadcast production partner, has been working with Singular.live and RCS since 2020; but wanted to elevate matchday graphics through more sophisticated data for the new Scottish Professional Football League season. RCS used their experience of integrating Opta data in live workflows to develop a bespoke graphics package for QTV, with enhanced data integration, through the Singular.live platform. Using its proprietary cloud-based Foundation Data Service, RCS added a purpose-built control application to Singular.live and streamlined the workflow. The RCS Cobb solution now enables QTV to access sophisticated live data and add it to graphics in real time to enhance the matchday viewing experience.

RCS Cobb enables QTV to save valuable time, as it no longer needs to manually enter data for output. Data can be pulled directly into RCS Cobb and output to video at the touch of a button.  Moreover, RCS training and operational support, combined with the intuitive nature of RCS Cobb, means that QTV’s staff can use the application without the need for expensive and time consuming broadcast graphics training.

QTV, which relies on Singular.live across several graphics workflows, can already provide team-specific versions of the SPFL Singular.live graphics package for various Scottish Premiership clubs, such as Celtic, Hibernian, Rangers, Hearts, St Mirren and Ross County; alongside Kilmarnock in the Scottish Championship, which has become the first club in their league to adopt the same new solution for their club TV live coverage. This delivers a coherent and professional look and feel across top-flight Scottish football. By professionalizing and enhancing matchday graphics across its clubs, the SPFL  is able to add more value to its brand. Singular.live recently refreshed QTV’s SPFL graphics for the 2021/22 season with a new design to further elevate Scottish football’s brand.

QTV delivers live remote production, graphics and distribution for over 150 Scottish Premiership, SPFL Championship, and Scottish League Cup matches per season.  Singular.live has provided its dynamic and responsive Intelligent Overlays - live custom graphics and overlays that can be created and controlled in the cloud - to QTV for two seasons. When SPFL football clubs were granted the domestic rights to stream their own games, QTV advised them to leverage Singular.live’s compelling cloud-based model for broadcast graphics.

“Singular.live and RCS provided a flexible graphics package which we deployed seamlessly across multiple workflows for our broadcast, digital and mobile coverage of SPFL matches,” says Jack McGill, CEO of QTV. “We saw an opportunity to do something transformative – both for Scottish football and for the broadcast sector in Scotland. The success of the first season has inspired us to expand using similar workflows. I'm looking forward to working with RCS and Singular.live on new ideas and features for the platform next season.”

“We’re delighted to support Singular.live to add that extra dimension to QTV’s matchday graphics for the SPFL,” comments David Peacock, Senior Project Manager, RCS. “RCS Cobb underlines how our data integration capability can transform matchday graphics for the viewer. It also showcases the cost effective and intuitive nature of RCS and Singular.live’s cloud-based tools - which can be used for matchday graphics by Premier League and Sunday league teams alike. Migration to cloud and remote production workflows is an area in which RCS has been increasingly active, supporting our clients all over the world over the last few years.”

“It has been excellent to work with RCS and QTV on this project and it really highlights the benefits of Singular.live’s broad partner ecosystem for customers,” says Andrew Heimbold, CEO of Singular.live. “If customers have specific requirements for their broadcast graphics, we are here to facilitate them, or bring one of our many partners in to support. The SPFL is a widely respected rights-owner and we are delighted to add them to the multiple other clubs, leagues and federations all over the world already using Singular”.

RCS ignites on-air viewing experiences for some of the world’s most watched live events. With offices in Los Angeles and London, RCS partners with leading sports leagues, federations, publishers, networks and social media giants to fuel audience engagement through a customized fusion of dynamic graphics, real-time data and social media. To give shape to each client’s unique vision, RCS develops sophisticated graphics and production systems that can be seamlessly deployed across media platforms.